Ava is 9 months old and she is trying to walk, she will walk along furniture but can't get the courage to walk by herself. 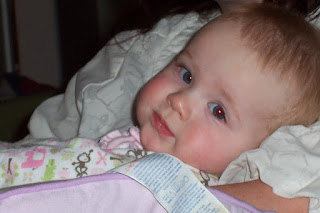 November was the start of the reason why I have not been blogging. In July Blake felt a lump in his neck, he thought it was a swollen gland or an infection or something and so he thought it would go away. He also had a cough and noticed that when the cough would go away so would the lump, but then the lump would come back when the cough came back. He didn't have health insurance at the time so he didn't want to go and have it be nothing. I kept bugging him about it and telling him to go to the doctor and every time I would ask him about it he would say "well, the lump isn't as big anymore".
In November, he came home from work one day and was just not feeling well, so he he finally decided to go the doctor. He said he was tired of feeling sick and tired. The doc wanted him to get some x-rays. Then when we got the results of the x-rays the doc said that something didn't look normal and so he wanted him to get a CT scan, so we waited over the weekend and on Monday he went in to get a CT scan. On Tues, we met with a pulmonologist (lung doc) to get the results. The Tuesday before Thanksgiving he was told that he had Lymphoma. He has a tumor in one of his lymph nodes in his chest and his neck. They wanted a biopsy to determine what type of lymphoma it is. We waited unil the next week to get the biopsy, we found out a few days later that it is Hodgkin Lymphoma, which is the malignant kind and that it was stage 2 cancer. The size of the tumor in his chest was 16cm! We couldn't believe how big it was! They didn't know it was that big until they went in for the biopsy. They said that treatment is chemo and radiation. His symptoms were: night sweats, weight loss, cough, and swollen lymph nodes in the neck. Who would have known?

Posted by Blake and Brittany at 7:03 PM