Sorry I didn't take any pictures of our Thanksgiving but we did have a lot of fun. We had it at the Tuckett's house this year. I was in charge of the candied yams and lemon pie. I was a little nervous making the candied yams because I hadn't made them before. But everyone said that they turned out good. After we stuffed ourselves with food, I hung out and watched tv and talked and Blake went shooting with the men in the family. They were gone for a few hours and when he came back we went over to my brother's house to see what they were up to. We played some games and watched the ending of "Home Alone" and around 9pm I was exausted so we went home. Then we went online and tried to decide if we were going to try to conquer the crowds of "Black Friday" and decided we could get the same deals online! So we ordered some Christmas presents that we needed to give to people and slept in on Friday morning. Well, kind of... Blake and I both had to work.

Well, that was our Thanksgiving and I hope that everyone else had a great one!

Update on Cierra, she is gettins stronger every day. She is rolling around and she is able to hold her head up and can stand with some help. We are continuing to pray for her full recovery!
Posted by Blake and Brittany at 4:56 PM No comments:

My life has been crazy for the last month. 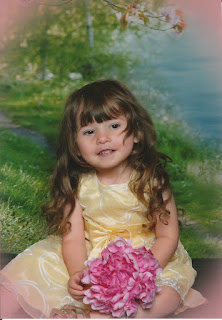 It started off with a phone call from my mom, letting me know that my neice, Cierra, was being rushed to the ER. She was on her way home from Idaho and asked me if I could go to the hospital to be with my sister. When I got to the ER, my neice was hooked to wires and she would thrash around and would not respond or look at anyone. It was the saddest I have ever seen. My nephew, Cierra's older brother Christopher, was sick the day before with a fever, sore throat and a cough. The doctors said it was the swine flu and gave my sister a prescription for Tamiflu. The next day Cierra started showing the same signs, so she called the doctor and he said to give her the Tamiflu. About 3 minutes after taking the medicine, little Cierra started have seizures and her lips were blue. That is when she was sent to the ER. They then sent her to pediatrics to try to get her stablized. She quit breathing and then they life flighted her to Primary Childrens in SLC.

She was in a coma for about a week, when she woke up we were suprised of the outcome. She didn't know anyone. She couldn't talk, walk, respond, nothing... You would look her in the eye and she would look at you like she didn't even know who you were. It was heartbreaking.

After 3 1/2 weeks in the hospital she was able to come home Thurday. Her eyes are open and her ams and legs have movement/ She will squirm while being held if she is uncomfortable and will let out a weak cry. As of yet there is no noticeable response to anyone. The bottom line is that they don not know when or if she will recover. The flu and pheumonia caused brain damage.

At first they told us that the MRI's did not show any brain damage. After the secon d MRI we were told that there was no large localized brain damager but there were speckels of damage scattered throughout her brain. Wednesday they admitted that since she has not fully awakened from her coma that they can only conclude that she has more damage than originally thought. They do not call it a coma any longer because she is somewhat awake. She has a feeding tube in her stomach, and she now has to re-learn everything she has been taught. She is practically like a newborn. It has been really hard on me to hear this and then I saw her on Friday for the first time and it was heart breaking.

My parents say she has made wonderful progress. She makes sporadic movements and is looking stronger every day. This has been really hard because this only happens to people on tv. You see it on Dateline or 60 min. But for me this is real life and I have a hard time accepting it.

I know this is a depressing post but I feel like people need to know what the Swine Flu can do. We are continuing to hope and pray that we will get our little Cierra back. She was so full of life and she loved everyone. She loved Dora the Explorer and that won't even get a reaction out of her. She is the sweeting little angel and I hope that one day she will come back.
Posted by Blake and Brittany at 3:09 PM 3 comments:

Sorry it has taken me a while to update you all on my life. I've been really busy lately. Last week I was really sick. I don't know what I was sick with, but I would say I have never been so sick in my life. Last week I was able to get the h1n1 vaccine so I am good to go now! Here is a recent picture of my 24 week belly. I feel huge already and I'm not even that big! 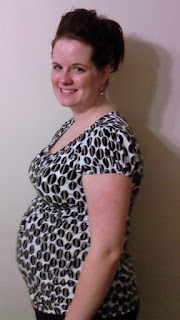 Yesterday I had my OB appointment and when the doc put the doppler on my belly to listen to her hearbeat she kicked it really hard! He laughed and asked me if I felt it, and I said "yep!" and then she kicked it about 3 more times. Then this morning around 6:45 I woke up to lots of kicking. I was laying in bed for a bit and put my hand on my stomach. I counted about 20 kicks in 5 min. Then Blake's alarm went off and I told him the baby was kicking and asked him if he wanted to feel. Of course he said yes! We felt the baby kick about another 8 times in the last 2 minutes that his hand was on my belly. A few weeks ago Blake felt her kick, but it wasn't very strong and it just felt like a little flutter. But these were really hard kicks and there was no mistaking it was a baby! This was the most that I have ever felt her move since I have been pregnant! I think we have a gymnast on our hands!
We finally have our room painted! I want to wait until we have everything set up before I take any pictures. Then you can get the full effect of what it will look like when Ava gets here. We are very excited to meet our little girl!
Posted by Blake and Brittany at 8:21 PM 1 comment: